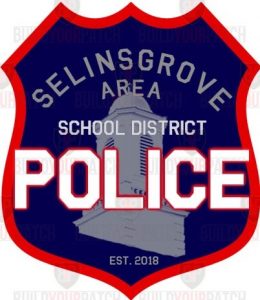 Pictured below are our officers and police department patrol units. You will see various officers utilizing both the patrol car and/or the mobile unit to patrol campus. If you require assistance or have any questions, contact the on duty officer or call our office. Chief Wolfberg graduated from the Pennsylvania State Police Academy in 1983 and completed a thirty year career with the Selinsgrove Borough Police Department, retiring in May 2013. During this time he received numerous awards and recognitions for his work with DUI enforcement from the Snyder County District Attorney’s office.

Chief Wolfberg became a certified scuba diver and served with Task Force 1 police dive team assisting with the recovery of drowning victims and stolen items. He is also a certified Emergency Medical Technician and firefighter.

Serving with the Selinsgrove Area School District since 2013, he is currently the transportation coordinator and safety director. He has served as the Chief of the Selinsgrove Area School District Police Department since its inception in 2018. He resides in the district with Kathy, his wife of 39 years and they have 2 pugs. They are the parents of three grown children, Kara, Cameron and Courtney and have two grandchildren. Officer Connelly is originally from the Pittsburgh area, moving to the Selinsgrove area upon graduation from the Pennsylvania State Police Academy as a State Trooper in 1987. He and another Trooper shared the Charles B. Gesford High Marksmanship Award at graduation.

During service with the State police, he attended/participated in the following notable events: The Hammer Mill paper strike in Lock Haven PA, The 125th Anniversary of the Battle of Gettysburg, the Camp Hill Prison riot(s), numerous Operation Night Hawk DUI programs across the state, local drug raids, speakeasy raids and underage drinking raids, among others. Trooper Connelly was awarded numerous Pistol Master and Safe Driver Awards as well as an award for DUI convictions in Snyder County. He has testified at court in other states and in two homicide cases. He was featured in a story in the second issue of “Valley Magazine” and was cover photo of that issue.

Officer Connelly has been serving with the Selinsgrove Area School District Police Department since its inception in 2018. He resides in Northumberland with Terri, his wife of 31 years. They have 1 grown son, Peirce Connelly, who resides in Lancaster PA. Grew Up In Selinsgrove Borough

Officer Hickman was a United States Army Military Policeman, attaining the Rank of E-5 (Sergeant).  In the United States Army he was a Patrol Officer, as well as a Community Services Officer where he taught D.A.R.E. to Students in our Military School Community.  (DRUG ABUSE RESISTANCE EDUCATION).

He spent the vast majority of his State Police Career as Criminal Investigator from April 1991 until 1999, where he specialized in Child Abuse Investigations and made over 125 child sexual abuse arrests and 4 criminal homicide arrests.  He promoted to Corporal in 1999 and became a Patrol Unit Supervisor for two years, after which he finished out the last 10 years of his career as a Criminal Investigation Unit Supervisor retiring from that position at Troop F – Selinsgrove Station in May of 2011.

He currently resides outside of Watsontown, PA., with his wife of 33 years, the former Colette CAREY-HICKMAN. They have 3 children, Cody Ryan 33, Kaitlynn Nicole 30, Karrie Ann 27, and the love of his life, Ava Jolie ADAMS his 3 year old granddaughter.

Hobbies include Hunting, Fishing, Camping, and Officiating DIII College Football for 5 years, High School Football where he will start his 20th Season in the fall of 2021. Officer Wayne Ghrist was born and raised in southwest PA and graduated from the Jeannette School District. He joined the military right out of high school and served as an Army M.P. (Military Police) Officer in Germany from 1986-1990. After release from the Army he joined the Army Reserves and was activated in support of Desert Storm in 1990-1991.

Trooper Ghrist retired from the PA State Police in 2012 and enjoyed his retirement with his wife of 34 years, Kim. They have two sons, Josh and Max. William Lee graduated from the Pennsylvania State Police Academy in 1993. After graduation, Tpr. Lee was assigned to Troop F Milton Station. He then transferred to Troop H and served several years before transferring to the Bureau of Emergency and Special Operations. Tpr. Lee was promoted to Corporal and eventually returned to Troop F. Cpl. Lee finished his career at the Selinsgrove station as a Patrol Section Supervisor. Cpl. Lee retired from the PA State Police in 2018.

After retirement, Mr. Lee worked at Susquehanna University in the Public Safety department prior to joining the Selinsgrove Area School District Police Department in 2020.

Mr. Lee enjoys training and participating in endurance sports in his spare time.

*ATTENTION – high school students who will be driving to school – Parking permits are available at the high school main office beginning Tuesday September 1st, 2020 at 10:00. You MUST have your drivers license, current vehicle owners registration card and proof of current valid vehicle insurance with you to process your parking permit.

Questions, comments, suggestions etc., may be forwarded to our department email at: SASDPD@seal-pa.org

We look forward to this new school year with all that it brings, and hope to make AND keep our campus as safe and friendly as possible. With your help we can all have a wonderful school year!